I can't believe it has been over 5 years since a Willy blog.  I still  have him, still run him.  Last year we tried to run at some rodeos, we didn't do as well as we hoped to, but Willy ran hard all year for me with zero soundness issues and was strong all year.  I credit that a lot to the products we use and represent.  He is also growing up and learning to take care of himself a little better :)  I will try to blog better this year.  Facebook is the place to follow us, on The Electric Horse & Rider page! 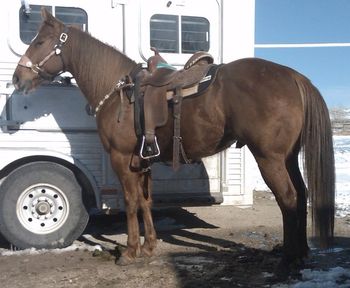 Eleven years ago, my friend Mila was browsing horse websites on the internet and forwarded me a colt I "might be interested in."  This colt was 2 yrs old, a stallion, and had Dash Ta Fame in his bloodlines, which I had mentioned I was looking for.
I sold my current horse, Glitter and sent a check to the owner for HH Famous Willard.  While we were at the Xtreme Barrel Race in Salina, Utah, we went down and picked him up.  He shook his head at me and sassed me when I went to catch him.  He proceeded to whinny and run around his stall for 2 days, lathered from head to toe.  I wasn't sure what I had brought home.
We started him lightly as a two year old, only about seven rides.  He was so intelligent and willing from the get go, if he wanted to buck, I could reprimand him verbally and he would drop his head and sigh, as if to say "fine."  We gelded him that next spring and I rode him about once every couple of weeks thru the summer.  He is a horse that meets you at the gate and asks what we are doing that day.
That winter I took him to Arizona and worked him on the bushes around the place I was staying at.  He only got to see the barrels a few times.  His four year old year I continued training him through the year and started taking him to a few exhibitions mid summer on.
December 2007 began our futurity year and it has been a wonderful and blessed year.  Here are the highlights of some of his races.  He is such a superstar, I thank God every day for him.  He blesses all those whose lives he touches.

Places in the avg at Idaho Barrel Futurity

Runs the fastest time of the Red Desert Futurity in June. (Places 3rd in the avg.)

Runs the fastest time of the Roper Rally Futurity in September.

"He don't run out of pedigree"